As a light source of fiber laser sensor, narrow linewidth fiber laser has the characteristics of interference to electromagnetic field, safety, small size and remote control. Currently, there are three schemes for obtaining single longitudinal mode narrow linewidth fiber lasers. 1) Non-coherent technology that eliminates spatial hole burning caused by standing wave effect by controlling the polarization state of the encountering light waves in the cavity; 2) adding unpumped doped fiber in the laser cavity to select the frequency and suppressing the saturated absorption of the mode-hopping Body; 3) short cavity fiber laser, including DFB fiber laser and short cavity DBR fiber laser. Comparing the three schemes, it is found that schemes 1 and 2 require the use of multiple polarization controllers, and most of them have annular cavity structures, which are difficult to control, low conversion efficiency, and extremely low output power; while scheme 3 has a simple structure, the output power exceeds 200mW, and the slope The efficiency is 24, and the difficulty lies in how to use a pumping method to achieve high output power on short gain fibers, and how to achieve special packaging. Ultra-short-cavity DBR structure fiber lasers have also been studied in China, but the laser has low efficiency, the maximum output power is only 11mW, and the line width is limited in the MHz range.

The structure of the FBG F-P cavity is shown in Figure 2. The FBG F-P cavity is etched on a common single-mode fiber, the distance between the gratings is 1 cm, and the total cavity length does not exceed 5 cm. The FBG F-P cavity reflection spectrum measured with a bandwidth AS E light source is shown in Figure 3. FBG F-P Ⅰ is composed of 2 FBGs with a reflectance of 50, with a total reflectance of 80; FBG F-P Ⅱ is composed of 2 FBBs with a reflectance of 80, and the total reflectance is 99. In the experiment, the FBG F-P cavity functions as a cavity mirror and as an inserted F-P cavity mode selection, which is conducive to the realization of all-fiberization of the laser. The number of output spectral lines of the FBG FP cavity is determined by the cavity length of the FP cavity and the reflection bandwidth of the FBG. The shorter the cavity length of the FBG FP cavity, the larger the output line spacing, the narrower the reflection bandwidth of the FBG, and the FP cavity can hold. The smaller the number of modes, the better the frequency-selective characteristics than ordinary FP cavity. Finally, due to gain saturation, in the mode competition of a few longitudinal modes, a single longitudinal mode of the center frequency is dominant, and a single longitudinal mode laser output is finally obtained. 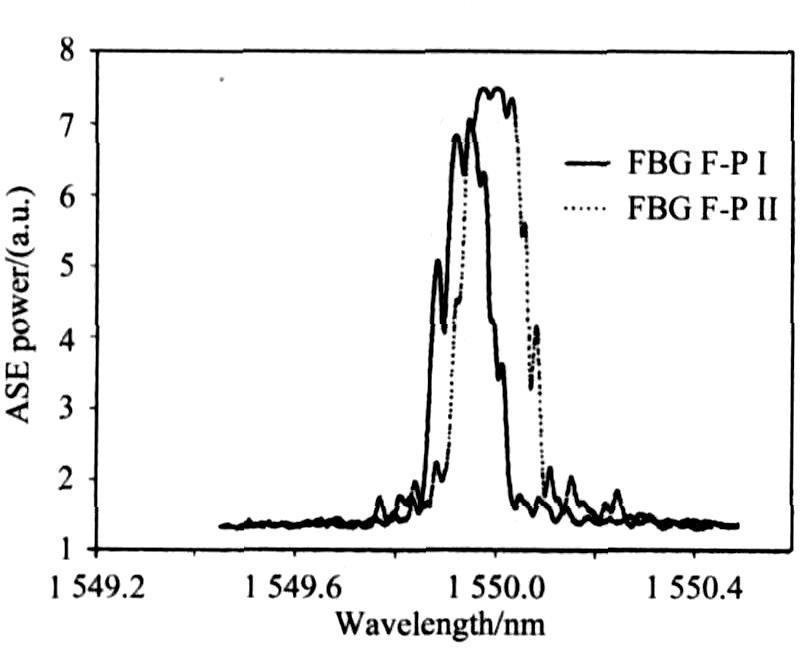 The Ando6319 spectrum analyzer was used to record the experiments. The highest precision of the spectrometer was 0.01 nm. The output optical power is accurately measured with an optical power meter. When the pumped optical power is 11 mW, the laser starts to vibrate. With the increase of pumping power, stable spectral lines begin to be obtained, and the 3 dB line width of the spectral line is not affected by the increase of pumping optical power. Figure 4 shows the output spectrum with a scanning range of 5 nm and an accuracy of 0.01 nm. The output laser of the analytical spectrometer has a center wavelength of 1 550 nm, 3 dB

The line width is less than 0.01 nm, and the signal-to-noise ratio is greater than 50 dB. After 1 h of continuous observation, no mode-hopping phenomenon occurred in the laser, and the wavelength drift range was less than 0.01 nm. When the pumped optical power is a maximum of 145 mW, the output power is 73 mW, the light-to-light conversion efficiency is 50, and the slope efficiency is 55. Figure 5 shows the output power as a function of pumping power. It can be seen from the figure that the output power changes linearly with the increase of pumping power. 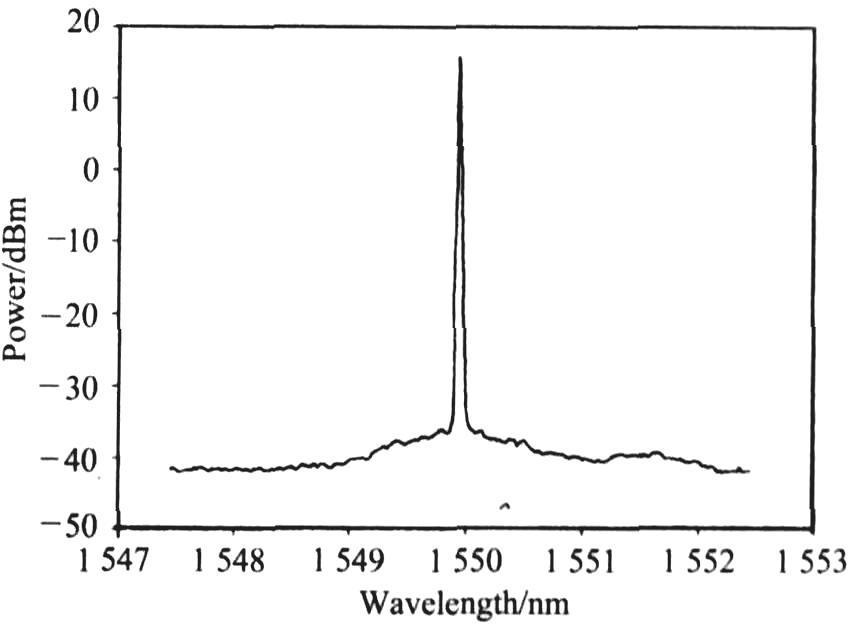 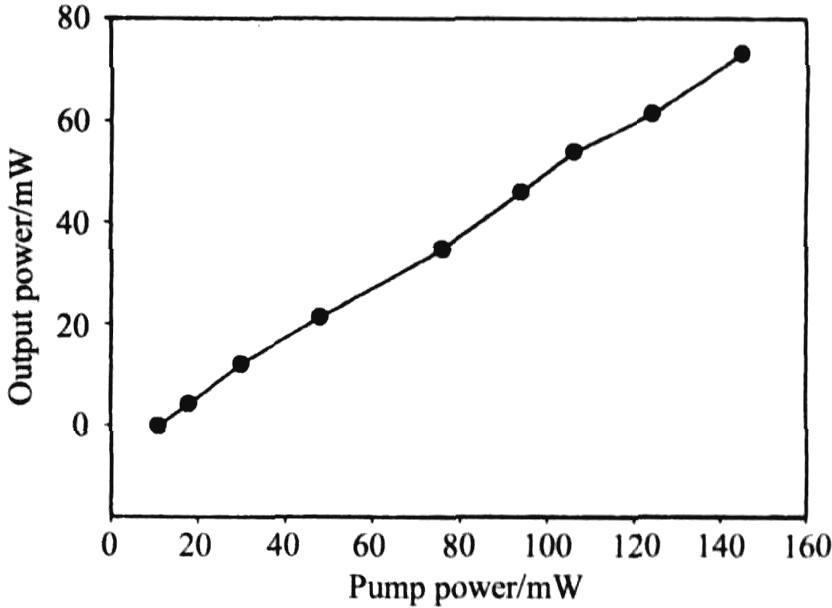 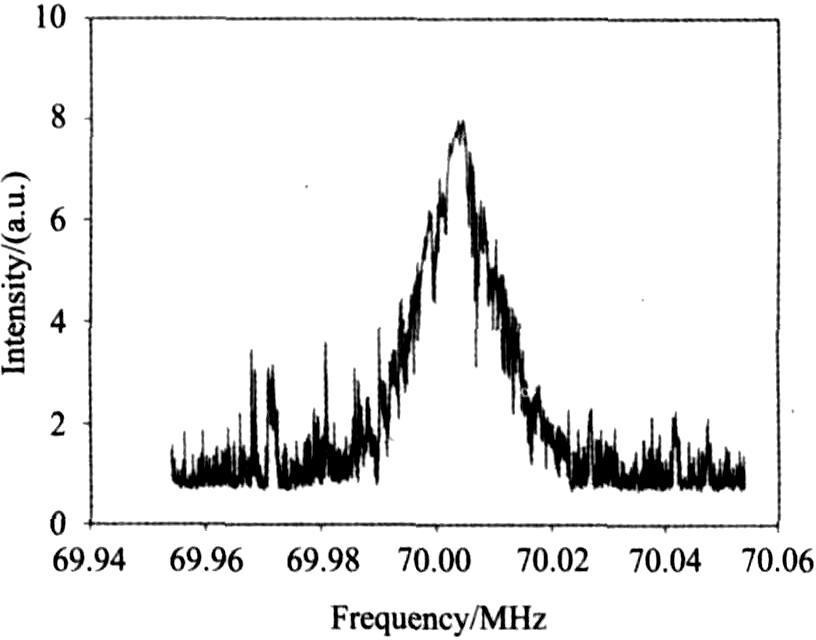 Combined with non-coherent technology, the use of all-fiber FR to suppress the effect of spatial hole burning, through the selection of two short FBG F-P cavity mode, a single longitudinal mode narrow linewidth fiber laser was developed. The power output characteristics are given. The threshold pumped optical power is 11mW, the output signal optical power is 73mW, and the slope efficiency reaches 55. The output wavelength of the laser is 1550nm, the spectrum is stable, and the signal-to-noise ratio is high. A 10km single-mode fiber delay line was used to measure the delay self-heterodyne line width. Due to the limitation of measurement accuracy, the 3 dB line width of the fiber laser was finally less than 10kHz. 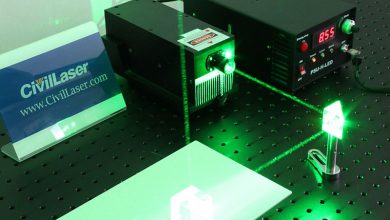 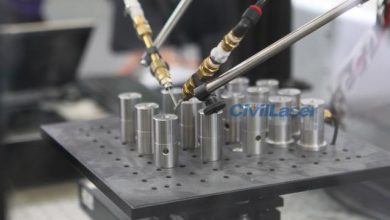 Difference Between FP and DFB Lasers 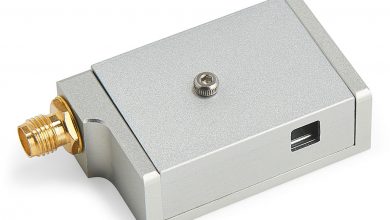 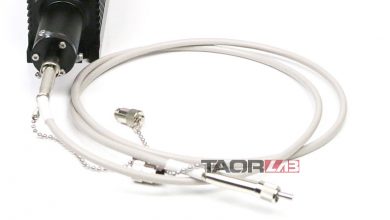 Do You Know the Seven Types of Optical Fiber?

Do You Know the Seven Types of Optical Fiber?